Green smoothies make me want to barf. Yeah, you heard me. I haven’t been able to log into my most beloved/hated friend, Facebook, without the scores of yogis I know touting their “green smoothies,” raw diets, gluten-free holy grails and big skinny smiles. And get this—I’m a yoga teacher.

So please excuse me while this yoga teacher goes barf. Don’t get me wrong, I love me some smoothies. I just like them to taste, you know, um…. what’s the word?

Good. Yes, I like things that taste good. And I happen to be the best smoothie maker I know (if you continue reading, maybe I’ll share my secrets). Here’s the thing: why the hell would I want to mar a delicious banana-blueberry-almond-butter-almond milk smoothie with the vegetable-y likes of kale?

Sure, I love my kale as much as the next yogi (I’ve at least got this evidence on my side should the yogi police come knocking on my door). I love it sautéed with garlic and red pepper flakes. I’ll even eat it in raw salads, letting lemon juice and avocado “cook” the kale. But liquefied? I just ain’t that hard core, man. I mean, why not just run into the backyard and grab a hunk of grass, some leaves and a few sticks, whip ’em up and call it a day if you want something that tastes like the contents of a landscaper’s garbage bag. I’ll say it again:

So why did I start consuming these heretofore barf-tastic green concoctions? Everything you read above was true until about six weeks ago; I was anti-green smoothies and proud of it. I’m not sure exactly what it was that sparked the change. In effect, the change marked the culmination of about six tumultuous and rather sucky weeks surrounding a big move across the country to a new city with a baby on the edge of toddlerhood (with newfound ability to scream for no reason and passion for electrical outlets and choke-able items). We christened our new east coast home with a never-ending loop of germ-y sickness. First I got sick, then baby, then me, then baby…you get the idea. But the physical sickness was the prettier part of the picture. Specifically, it was my own unattractive mental suffering and concomitant immense failures (at least in my own eyes) as a wife, mother, and yogi; it was suddenly awakening to the crap piled high on top of me that made me want to dig myself out, shake things up, expand my horizons, jump out of an airplane, or, you know, maybe just put some damn kale into my blender.

It helped that I had some yoga teacher friends back in Boulder, proud, cleanse-o-philes (frankly I’d never really paid too much attention to the raw and green whos-its and whats-its of Jo and Jules before). When I saw they were busy writing a book about their cleanse-capades, I was genuinely proud of what they were doing, even if I couldn’t imagine following them down that rabbit hole myself. Then they posted a free e-book of recipes online. I wanted to support them as honestly as I could (and honestly, I was pretty sure I wasn’t into whatever raw, gluten-free green juice I assumed they were selling). So, instead of mindlessly clicking “like” on our friend/foe Facebook (oh, don’t tell me you’ve never done that!) I took the time to read the e-book.

I was surprised. No kale-cayenne-cider vinegar-cabbage juice here. The recipes looked, um, what’s the word? Good. The recipes looked like they would taste good. I noticed that the green smoothie recipe was just a tiny hop away from my banana blueberry almond smoothie. All I had to do was add some green, and not a lot of it, not if I didn’t want to, some cinnamon (hmm, I’d never thought of that) and try hemp seeds instead of my almonds. Well, I was shaking things up. And while I couldn’t quite work up the nerve to skydive, I could handle some Swiss chard in a smoothie. Well, maybe just a little bit, ok?

I’m still doing the smoothies. Occasionally I branch out and join the little one for a hot breakfast, especially as the temperature has finally retreated down and away from the humid swampy mess that enveloped my skin all summer. But I fell head over heels for the Swiss Cinnamon Smoothie (recipe is in the free e-cookbook) for breakfast. Not only did it taste good (Swiss chard is practically imperceptible in this recipe, folks), but man, what a difference in my life. Look, I didn’t do a scientifically controlled study. I only have my experience. Did I say only? I mean, I have my own experience and that is way more like everything.  My everything included more energy, satisfaction (I used to need a small meal soon after my non-green smoothie- not so anymore), energy, feeling good bad-ass-ness. The more I ate leafy greens, the more I wanted to eat leafy greens –

the more what I thought I should be eating converged with what I wanted to be eating. The more those greens started to taste, um, good. I even signed up to do the next Conscious Cleanse starting this Sunday—eek!

Truly, though, this chard-forged shift in my daily diet, which in turn engendered lots of shifts on other levels, has had repercussions far beyond food. There’s an overall feeling of a return to who I really am.

Did I really just say that? Excuse me while I go barf. 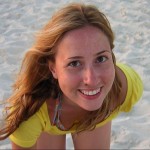 Jean Marie Hackett
Jean Marie is a yoga teacher who likes to write. She recently relocated to Washington D.C. with her husband, toddler and two crazy dogs after two wonderful years living and teaching yoga in Boulder Colorado, and several years working as an attorney in New York and Boston before that. She met Jo and Jules in Boulder but did not get to know their inspiring work (and their green smoothies!) until the challenge of transitioning to a new town with a small child prompted her to take a closer look. Now in love with her Swiss chard concoctions, she is very excited (and um, a bit scared!) to be embarking on the next installment of the Conscious Cleanse.
Related Posts
Comments